This Friday, September 17, there are quite a few films coming out in the Nashville area.  As we approach the fall, we start to see some of the better films rise to the surface.  We get a small taste of some of those films this weekend with The Town.
The Town is probably one of the most anticipated films in the past couple of months and has a solid 91% pre-release score on Rottentomatoes (which could rise/fall a few percentage points come tomorrow).  Ben Affleck directs and stars in the town along with every man’s actor, Chris Cooper, Mad Man Jon Ham, Gossip Gal Blake Lively and Jeremy Renner in his first big film since he was nominated for Best Actor in the fabulous 2010 Best Picture winner, The Hurt Locker.  The Town looks like it could fit right into the same mold as Gone Baby Gone, Affleck’s first film as a director, but slightly more promising.  Gone Baby Gone had moments of greatness.  It had style, great acting performances and some haunting scenes, but had a script that at times felt sugary and ultimately had an ending that stunk.  The Town has a cast of some of the best TV actors whose careers will no doubt benefit from being in this film.
Devil, that elevator movie you’ve been seeing in the commercials, gets a release today and M. Night Shyamalan’s name is on it, but thankfully it’s as a producer and not a director.  This is a good thing because he hasn’t made a good film since Signs, which begs the question why a film would want his name on it.  Obviously, they are doing this to sell more tickets, but these days seeing “Shyamalan” on a movie acts as a repellant.  Devil was not screened for critics, either; meaning that the producers expect negative reviews, which will detract from ticket sales.  So it’s safe to assume that those who made Devil know it’s bad so they put Shyamalan’s name on it and did not allow critics to see the film before today.  I’m not sure that either Shyamalan or the film will benefit at all from the name-dropping, but I think it’s safe to say that both are “going down”. 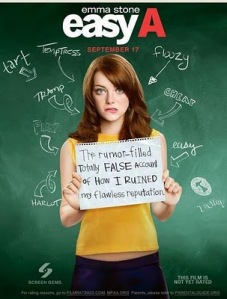 If you’ve been to movies at all this summer then you’ve more than likely seen previews of Easy A, a high-school comedy that feels like a combination of Mean Girls and Saved.  Emma Stone, who seems on the verge of “big-time”, stars as Olive, a girl who purposely earns a bad reputation at school in order to improve her social standing. Easy A also stars Amanda Bynes, Thomas Haden Church, Patricia Clarkson, Lisa Kudrow, Stanley Tucci and…wait for it…Malcolm McDowell.  The film is getting positive pre-release reviews and it’s got a really good cast so maybe a light-hearted comedy with a decent story is just what you need this weekend, but don’t expect it to be memorable.
I assume you saw Toy Story 3 this summer.  If so, then you realize that I’m wasting my breath by writing about a film called Alpha & Omega, which is also getting a release this Friday, September 17th.  It’s a 3D animation about two wolves that get lost and then have to find their way home.  Don’t even consider going unless you have kids.  Judging from the dated animation, tired plot and the reviews on Rottentomatoes, which is a dismal 13%, you might be better off skipping this one.  If you do have kids, then I should let you know that both Toy Story 3 and Despicable me are still playing in the Nashville area.
Advertisement