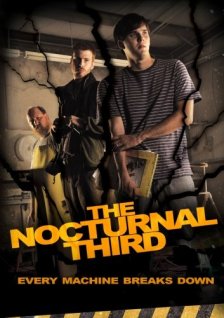 A tired and over-worked Eli Gottfried is an aspiring artist.  For now he works at Stafford Stoneworks, a local factory in an Alabama town, to keep his dream alive.  Eli starts working the night shifts on top of his regular work load to help himself and his wife, Ellie, get out of debt.  Eli works this particular night shift with another employee, Harold.  Eli sketches in his down time and, deprived of sleep, dozes off.  Whether it be from exhaustion or other demons Eli is fighting, he dreams of bloody scenes and an attacking, animated cat (in an impressive use of effects).  Harold has an accident with one of the cutting machines and is injured.  Eli attempts to fix the machine and get help for Harold as a stranger, named Jeffrey, who has run out of gas comes in.  There’s something not right here, but we must endure a lengthy, seemingly “shoot-the-breeze” conversation between Eli and Jeffrey that builds tension before the true intentions of the visitor are unveiled.  Here things get foggy and Eli finds himself in a mysterious and dangerous situation.
The Nocturnal Third hones in on a dark, moody tone early on and doesn’t let up. There exists a feeling that something is going to go wrong, but what and when is uncertain.  Director Benjamin Stark successfully creates suspenseful moments through his film with well-placed musical queues, creative (but not unnecessary) camera shots and clever editing.  He is able to create and stir emotions of suspense and wonder of the unknown in this audience through his film.  We piece together the missing links of this mysterious situation alongside Eli as he plays the detective by going through vehicles and listening in on phone conversations.  It seems that the stranger, Jeffrey, who spent so much time getting to know Eli, is no stranger at all, but just one link in a much bigger conspiracy.  The film builds pressure and crescendos with tension to an ending “workshop apocalypse” as Eli attempts to escape his foggy factory.
One of the finer acting moments is towards the beginning of the film in a scene that takes place in Eli’s home.  The very little time he has between shifts is spent with this wife as she speaks with the credit card companies over the telephone.  This scene works well because we get a glimpse into Eli’s personal life.  Eli and Ellie struggle to stay afloat, yet the relationship of these two mild-mannered individuals seems exceptionally sturdy.  These are good people and that makes it all the more suspenseful when Eli is in danger.  There are so many of us that can relate to Eli Gottfried.  He doesn’t necessarily love his job, but must work to support his family and to keep things going until he can do what he really loves.  The scene at home along with the workshop conversation between Eli and Jeffrey is built on exceptional acting and well-written dialogue.
The Nocturnal Third was shot on location in North Alabama and the overall production of the film would not lead one to assume that it was made on such a low budget.  The Nocturnal Third is truly a quality film with a good story and is technically well made.  Based on the execution, it’s clear that the filmmaker is familiar with the art as the logistics of filmmaking and clearly knows what he’s doing.  Most of the film takes place in a machine shop.  The attention-to-detail, the “moving cogs”, gives a convincing impression that there is a real factory at work here.  The cinematography is purposeful and well thought-out.  It’s subtle, but definitely takes some chances and all of this is strongly supported by a solid cast of actors.
The Nocturnal Third is the follow-up to Wonder Mill Films’ first feature film, A Genesis Found, also shot in Alabama.  The Nocturnal Third is an impressive work from an independent group of filmmakers that has made and surely will continue to make great work.  Be sure and check The Nocturnal Third website frequently as it often provides clips of the film.  Also, check out this great interview with Benjamin Stark, director of The Nocturnal Third by al.com editorial producer, Ben Flanagan.