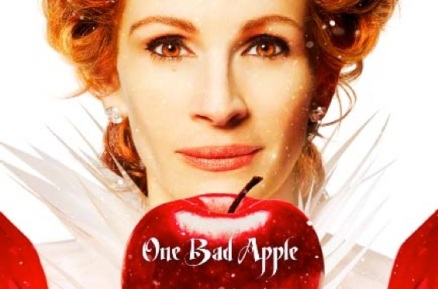 Mirror Mirror
Julia Roberts is coming off quite an alarming string of duds and that string may only be getting longer if Mirror Mirror, as self-aware as I’m sure it is, bombs like I think it will.  Roberts plays the evil queen to the virtual unknown, Lily Collins’ Snow White.  The trailer paints the film out as a silly take on the classic Snow White tale and especially cashes in on all of the dwarf jokes.  However, Mirror Mirror is not the only Snow White reboot coming out this spring.  Snow White and the Huntsman gets a June 1 release and it stars Kristen Stewart who essentially plays a warrior-like Snow White and Charlize Theron as the especially evil queen.  Of the 2 films, Mirror Mirror, by far, looks like the lamer of the two, but I imagine that it will bring in more of the little kids.  The Huntsman is sure to carryover the Twilight freaks.  I wouldn’t expect Mirror Mirror to still be playing in theatres by June 1, but if it were, then Huntsman would be sure to push it out for good.  At this very moment, Mirror Mirror has a 52% on Rottentomatoes.

It should also be noted that Mirror Mirror is not based on the 2003 Gregory MacGuire novel, Mirror Mirror, which is a disturbing and twisted take on the Snow White tale.  Casting for that movie might include Lars Von Trier as director, a young Shelly Duval as Snow White and a 90-year-old Tilda Swinton to play the evil queen.

Wrath of the Titans
Wrath of the Titans is the sequel to 2010’s Clash of the Titans and if you need anymore information than that then you might just check out Rottentomatoes where you’ll find a 22% the day of its release.  The cast itself is strong and includes: Sam Worthington, Ralph Fiennes and Liam Neeson, but the film holds no anchor in this society’s pop culture.  It’s not relevant in the least, but the film itself will almost definitely rely on special effects, an aspect of film that will draw in a vast number of fanboys.

Look for both films to bomb and The Hunger Games to rule the Box Office for a second week in a row.

Check out theatre times for these new releases as well as other films currently playing in the Nashville area.

The Turin Horse is a 2011 Hungarian film directed by Bela Tarr and is a fictional take on the fate of the horse that was protected by Friedrich Nietzsche, which caused that illness which stuck with him until his death.  Another fascinating aspect of the film is that it was shot in only 30 takes.  The Turin Horse won the Grand Prix and the Berlin Film Festival as well as Official Selections at the Telluride,Toronto and New York Film Festivals.

Bullhead is a 2011Belgium film directed by Michael R. Roskam about a cattle farmer roped into dealing with a sketchy beef trader.  Bullhead was nominated for Best Foreign film at the 2012 Academy Awards.

Jiro Dreams of Sushi is a 2011 Japanese documentary directed by David Gelb about the 85 year old, Jiro Ono, who is widely regarded as one of the greatest Sushi Chefs in the world.

Diary of A Country Priest – April 1 at 7:00 pm
This 1951 French film directed by Robert Bresson stars Claude Laydu and a priest struggling with keeping his own faith during a deathly illness while tending to the needs of his flock.  The film is based on the 1937 novel written by Georges Bernanos. Diary of A Country Priest won the Grand Prize at the Venice International Film Festival.

Army of Darkness – March 30 & 31 at midnight
Army of Darkness is the final film in Sam Raimi’s The Evil Dead trilogy, a series that goes from horrifyingly scary with The Evil Dead and eventually ending with the outright absurd comedy, Army of Darkness.  Bruce Campbell returns as the main character from the other films, Ash, and is now trapped in the Middle Ages battling claymation zombies and skeletons and must fulfill a quest in order to return to his present time.  What started out as a legit horror series, albeit with its own type of humor, ends with Army of Darkness going all in, lock, stock and smoking barrel with this slapstick medieval quest film that has virtually no ties to its preceding films save for the main character and his trust chainsaw.  Not to take away from Army of Darkness as a stand-alone film.  The film has its own band of trusted fans and has a strong presence in the world of cult films, hence the midnight showings.  When looking at Army of Darkness by itself, one can appreciate its humor and style, but when the 2 preceding films of the trilogy have such a strong standing, for some, it’s hard to do so.

Hugo – March 31 at 10:00 am
In keeping with the screening of A Trip to the Moon, Hugo will be playing this Saturday at 10:00 am as a part of the Saturday Kids Shows, which screens a movie appropriate for children every Saturday at 10:00 am through the month of May.  Hugo is directed by a legendary film director in his own right, Martin Scorsese, and is a fictional story surrounding the filmmaker, George Melies and his groundbreaking film, A Trip to the Moon.  Hugo won 5 Oscars at the 2012 Academy Awards including: Sound Editing, Sound Mixing, Cinematography, Art Direction and Visual Effects.  It’s a wonderful movie for all ages.