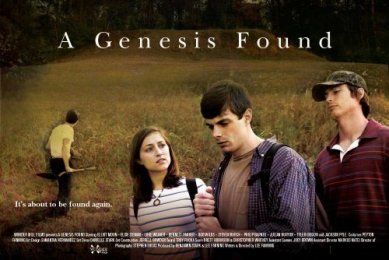 A Genesis Found is a moody film with an underlying darkness and intensity that slowly crescendos along the way.  The film jumps back and forth between two parallel storylines separated by a span of 70 years and connected by blood.  The first takes place in 1938 in Moundville,Alabamaduring an excavation dig at the Indian mounds.  John Patton Jr., a young man working at the dig, stumbles across an incredible and mysterious find; the details of which are revealed to the audience bit by bit over time as the film journeys between the two stories.  The 1938 storyline has an aged and darker look to it that really gives it the feel of an older film and sets the mood for the dark and mystifying events that are unfolding.  Before his death, John Patton Jr. writes a book explaining his discovering an odd skeleton with an alien-like skull.  In this controversial book, Patton Jr. tells his story to the world; a story that would imply the existence of life on other planets and, perhaps, that the life on this planet began by those very aliens.

70 years later, the story of John Patton Jr. is still a mystery, but one that Bart, his grandson and documentary film maker, is determined to prove accurate.  He employs a film crew and an anthropology professor and manages to convince his cousin and anthropology student, Gardner, to join in his endeavor.  The team attempts to delve deeper into this mystery, find the skeleton and prove to the world the secret that his grandfather supposedly discovered is indeed true.

In 2010, A Genesis Found became the first feature film from Wonder Mill Films.  It was written and directed by Lee Fanning and stars Elliot Moon, Luke Weaver and Bennett Parker.

When a film makes good use of its surroundings, whether a beautiful city or an ancient landmark, it only adds to my enjoyment it; especially when those locations are recognizable.  A Genesis Found takes full advantage of its location; using the ancient Indian mounds of Moundville, Alabamaand the Black Warrior Riverfrequently throughout the film. Indeed, the mounds are almost another character of the film altogether as they serve as a continual backdrop of the story itself.  The film takes a realistic setting and brilliantly adds an element of science fiction and fantasy to it.  A Genesis Found is grounded in reality, but its fictional twist lies in the suspension of our beliefs; the possibility of something other-worldly going on.  Like the bending Black Warrior Riveritself, the A Genesis Found weaves back and forth over a 70 year gulf separating these two storylines, balancing and unfolding the over-arching story with great timing, yet by the end, there’s still a little bit of that mystery left over.  Much like The Nocturnal Third, the second Wonder Mill Films feature, A Genesis Found has an eerie feel to it that increases our anticipation as the film climaxes to its ending.  And after seeing both of the Wonder Mill Films’ features, I find my anticipation for the 3rd film increasing as well.