Winner: An American in Paris
Nominees:
– Decision Before Dawn
– A Place In the Sun
– A Streetcar Named Desire
– Quo Vadis? 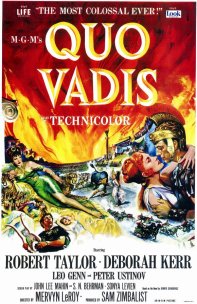 Director: Mervyn LeRoy
Starring: Leo Genn, Robert Taylor, Peter Ustinov, Deborah Kerr
Wins (0):
Nominations (8): Picture, S. Actor (Genn), S. Actor (Ustinov), Drama/Comedy Score, Art Direction (Color), Cinematography (Color), Costume Design (Color), Film Edit
Rotten Tomatoes: 88%
Quo Vadis?, meaning, “Where goest though?”, is set around the year 64 AD as the first century church was growing rapidly under heavy persecution from the Romans during the reign of the psychotic Emperor Nero, played wonderfully by Peter Ustinov.  A young Roman commander, Marcus (Robert Taylor) returns to Rome from war when he meets and falls in love with a Roman woman, Lygia (Deborah Kerr) the adopted daughter of a retired Roman general.  Lygia and her adopted family are Christians and Marcus becomes intrigued by how different they are in comparison to normal way of life of the Romans.  This fictional love story is told in lead up to the actual burning of Rome by Nero, who blamed the Christians.  Quo Vadis? is a decent  film and is intriguing for those who might be particularly interested in the topic.  There are big sets in Quo Vadis? and it has an epicness about it, but as is the case with most films in the 1950’s, the sets exist around the story and don’t impede upon it in a distracting way; an attribute that cannot be said of those epic films of the 1960’s.  The film received nominations for Art Direction, Cinematography and Costume Design, though it didn’t win a single award.   Peter Ustinov’s performance as the evil and gluttonous Emperor Nero was nominated, but had zero chance of winning due to his counterpart, Leo Genn, also being nominated and, of course, the performance of Karl Malden in A Streetcar Named Desire. 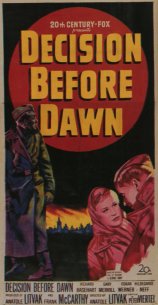 Director: Anatole Litvak
Starring: Oskar Werner
Wins (0):
Nominations (2): Picture, Film Edit
Rotten Tomatoes: 100%
What an excellent little film set in the waning days of the Second World War starring Oskar Werner, who plays Happy, a German prisoner of war who agrees to become a spy for the Americans.  Happy, Tiger, another prisoner, along with an American Lieutenant Rennick parachute into Germany on a mission to expedite the surrender of a German general and his corps.  Happy hides out in several homes, trains and taverns in the German countryside and encounters people with different outlooks and attitudes about the war.  While hiding in the rubble of a city during a bomb raid, Happy finds his two other partners.  They have received vital information regarding this German general and have to swim across a river back to the American side to hand over the information.  Tiger runs away and is shot by Rennick.  So that Rennick can make it safely across, Happy creates a diversion, is caught and executed.  What I find so wonderful about this film is that it is obviously smaller in production value and budget than the other films in the group; something that doesn’t happen very often at all when talking of Best Picture nominees.  Plus, it was directed by Anatole Litvak, a Ukranian, which I feel gives it sort of a foreign feel that these other films don’t have.  Both Decision Before Dawn and Quo Vadis? were not nominated for director, getting the bump for Huston’s The African Queen and William Wyler’s Detective Story.  Decision Before Dawn only received two nominations overall with zero wins.

Director: Elia Kazan
Starring: Marlon Brando, Vivien Leigh, Karl Malden, Kim Hunter
Wins (4): Actress (Leigh), S. Actor (Malden), S. Actress (Hunter), Art Direction (B&W)
Nominations (11): Picture, Director, Actor (Brando), Screenplay, Drama/Comedy Score, Sound, Cinematography (B&W), Costume Design (B&W)
Rotten Tomatoes: 98%
Streetcar is deemed as one of the all-time greats.  Though, just like All About Eve, I personally don’t hold it in as high esteem as most people.  There’s no denying that it’s an extraordinary film what with one of the greatest directors of all time in Elia Kazaan adapting perhaps the best play of one of the greatest American playwrights, Tennessee Williams.  To say that the cast of Streetcar was a juggernaut would be an understatement, as the film was the first to award the Oscars in 3 acting categories (Leigh, Malden, Hunter); something that didn’t happen again until Network in 1976 and not since.  One might use this opportunity to argue Brando’s being snubbed for the veteran Humphrey Bogart in The African Queen, but I shall not.  The film itself is a fine one with an incredible sense of tone and mood.  Set in the French District of New Orleans, Vivien Leigh is Blanche, an aging woman with a Southern drawl who has come from Mississippi to visit her sister, Stella (Kim Hunter), who lives virtually on pins and needs due to the violent and quick tempered nature of her husband, Stanley (Marlon Brando).  What unfolds is a stunning exhibition of melodrama concocted with an animalistic sexuality and mixed with the sticky humidity of southern Louisiana.  There’s something primal about Streetcar and, as with any Tennessee Williams play, the meaning of it all lies well beneath the surface, the screen or the dialogue.

Director: Vincente Minnelli
Starring: Gene Kelly
Wins (6): Picture, Story/Screenplay, Musical Score, Art Direction (Color), Cinematography (Color), Costume Design (Color)
Nominations (8): Director, Film Edit
Rotten Tomatoes: 98%
An American in Paris has, with all the dancing and music and noise, the makings and feel of a Tom & Jerry cartoon: busy, vibrant and after 15 minutes mind-numbingly obnoxious.  Vincente Minnelli, the director that brought us the delightful, Father of the Bride, released this Gene Kelly-starred dance musical and managed to win Best Picture doing it.  However, it should not go unsaid that Minnelli did not win Director, something that’s only happened 13 times since 1940.  The problem with An American in Paris is there’s not much of a story and what little plot there is isn’t told very well at all.  The film has to rely on the dance and musical numbers to carry it through.  There are attempts at humor that mostly fall way flat and while I’m being critical, even those dance numbers aren’t at all what you’d expect from a Gene Kelly film.  Kelly plays a bachelor and aspiring painter in Paris, named Jerry, who doddles between two women:  Lise, whom he likes and Milo, whom he has no feelings for at all but she’s sort of his sugar-momma, so he lets her stick around, I guess.  It’s hard to tell because the film sort of pushes her aside.  Jerry pays as little attention to Milo as Minnelli does to this subplot.  What An American in Paris amounts to is some weird form of a dancing, singing romantic comedy, but not one that is at all interesting, except for the fact that for most of the film, Jerry doesn’t realize that Lise is engaged to be married to an acquaintance of his.  The big ending comes just as Jerry watches Lise ride away with her fiancé after leaving a ball.  He then falls into a reverie, which turns into this really long, really abstract dance number to Gershwin’s “An American in Paris”.  It amounts to absolutely nothing before cutting back to revealing her running back to jump into his arms.  I don’t understand at all how this film won Best Picture.  Quite frankly, it’s the worst of the bunch and throughout the 1960’s and 1970’s as I’ve been doing this Wizard of Oscar project, only a handful of times has the Best Picture been the worst of the 5 nominees (1956 and 1968, maybe).   This could be in the running for worst Best Picture ever and I can’t help but wonder how it not only won, but got the nomination over other films, like The African Queen, Strangers on a Train or even the Dickens adaptation, Scrooge.

Director: George Stevens
Starring: Montgomery Clift, Elizabeth Taylor, Shelley Winters
Wins (6): Director, Screenplay, Drama/Comedy Score, Cinematography (B&W), Costume Design (B&W), Film Edit Nominations (9): Picture, Actor (Clift), Actress (Winters)
Rotten Tomatoes: 75%
A Place in the Sun is easily my pick for the Best Picture in this group of nominees.  It doesn’t come close to matching the flashiness of An American in Paris and though the acting is fantastic, it doesn’t beat the performances of A Streetcar Named Desire.  I do find it surprising that it won what was the equivalent of the Adapted Screenplay category over Streetcar.  A Place in the Sun is the adaptation of Theodore Dreiser’s novel, An American Tragedy.  It’s a dark tale of a young man named, George (Montgomery Clift), who moves to town in order to find a job in a factory run by his rich uncle.  George takes a job there and develops a rather one-sided relationship with a fellow female employee, named Alice (Shelley Winters), whose affections weren’t reciprocated to nearly the same degree.  Young and modest and perhaps a tad naïve, Alice falls quickly for George.  She might be a little possessive and it might have something to do with her unbelief that someone as dashing as George would like someone as plain as herself.  As George moves up the corporate ladder, he is more often included in the gatherings of the elite crowd hosted by his uncle’s family.  Alice isn’t thrilled since this takes away from her time with George.    At one of his uncle’s parties, George sees and at once falls in love with Angela (Elizabeth Taylor), a sort of socialite.  George begins a heartless run of giving Alice the cold shoulder and spending more time with Angela, which couldn’t come at a worse time since Alice has become pregnant.  George is invited to Angela’s lake house and, in response to Alice’s objections, insists that this trip will do a lot of good for his career and the future of their child.  George falls deeper for Angela spending time water-skiing and sunbathing with her at the lake.  George realizes his unfortunate situation and devises a plan to murder Alice so that he can be free to marry Angela.  Meanwhile, Angela sees a picture in the newspaper of George and Alice together at the lake and drives to the house to confront George and expose him.  George meets her away from the house and Alice forces him to marry her, but the problem is that it’s Labor Day and no one is at the court house.  However, George suggests that they spend the day on the lake, an idea which gives Alice false hope for their relationship.  George plans to kill her out on the lake, but has seconds just before making the move.  However, Alice randomly falls in the lake and drowns (fulfilling the Shelley Winters curse of always dying in her roles) with no efforts from George to save her.  George is exposed, arrested, tried and found guilty of murder for which he will die in the electric chair.  A Place in the Sun is a dark film with some big name actors that don’t outdo their own performances.  It’s hard to believe something so dark can come out of the early 1950’s, but A Place in the Sun certainly goes there.  Rightfully so, George Stevens won the Oscar for Best Director.  Montgomery Clift played this role of an evil, selfish young man perfectly, receiving a nomination for Best Actor along with his counterpart, the great Shelley Winters, who was nominated for Best Actress.  And though Elizabeth Taylor did not get a nomination, she once again steals every scene that she’s in just with her sheer beauty.  The film won for Drama/Comedy Score and took home the Oscars for Cinematography, Costume (Black and White) as well as film editing.  There’s not much to this film on the outside, but it certainly draws you in with a story that’s just as disturbing as if it were released today.