Director: Richard Thorpe
Starring: Robert Taylor, Elizabeth Taylor, Joan Fontaine
Wins (0):
Nominations (3): Picture, Drama/Comedy Score, Cinematography (Color)
Rotten Tomatoes: 79%
Ivanhoe is the tale of the English King Richard the Lionheart (1157-1199) who disappears during his return from the Crusades.  His friend, Ivanhoe (Robert Taylor), searches for Richard and finds him, but struggles to get him back to the throne due to Richard’s brother, John (1199-1216), who desires to reign in his place.  There are so many films that are connected to this point in history: The Lion in Winter (1968), Becket (1964) and any Robin Hood-related movies.  This probably has everything to do with my interest in the subject, but I always find enjoyment in watching these types of movies, even if a lot of them suck.  The effects and props in Ivanhoe might seem a bit dated, but I’ll gladly overlook the antiquity of the production design as long as the film doesn’t call so much attention to said props; something that has gotten under my skin during this Wizard of Oscar project.  Ivanhoe tells a story around the sets and who cares if it’s dated?  It’s just fun to watch movies about jousting knights and sibling kings duking it out for the throne.  Another enjoyable attribute of Ivanhoe is that a young Elizabeth Taylor plays the love interest.  Ivanhoe reminds me of what the Lord of the Rings trilogy might look like if it were made 50 years ago, except that the flying arrows in The Lord of the Rings would stick into the walls, but in Ivanhoe, they just bounce right off like little toothpicks.  It’s not a spectacular film by any stretch, but it’s fun.

Director: John Huston
Starring: Jose Ferrer, Colette Marchand
Wins (2): Art Direction (Color), Costume Design (Color)
Nominations (7): Picture, Director, Actor (Ferrer), S. Actress (Marchand), Film Edit
Rotten Tomatoes: 71%
Directed by the legendary John Huston, Moulin Rouge is a biopic of the renowned French artist (also referenced in Woody Allen’s 2011 film, Midnight in Paris), Henri de Toulouse-Lautrec, a Post-Impressionist artist known mostly for his unique painting of the indulgent, carefree and decadent Paris life.  His work tended to be used for advertisement posters for the very venues that he recreated in his art.  Moulin Rouge does a good job without too heavy a hand of recreating the actual scenes from his paintings, which served to create a moment in which Lautrec might have been inspired to paint those now famous pieces.  Lautrec was extremely short and suffered from congenital health problems that more than likely had everything to do with the fact that his parents were also first cousins.  Jose Ferer received a Best Actor nomination for his role as the troubled Lautrec, though to be playing such a creative and tragic artist, I found Ferer’s performance to be quite stiff, indeed.  However, it could just be the way Ferer played him.  It’s hard to believe that a life containing such heartache and passion would be conducted with such a lack of emotion.  But whatever, I think there’s a rule somewhere that says the Academy has to nominate whichever actor is playing the lead in a biopic.  Though Moulin Rouge is an in-depth look at this fascinating and troubled individual, it was not particularly something that I really enjoyed.  Moulin Rouge tied High Noon and The Quiet Man with the most nominations with 7.  It won the Oscar for Best Costume Design and Art Direction (Color).

Director: John Ford
Starring: John Wayne, Victor McLaglen, Maureen O’Hara
Wins (2): Director, Cinematography (Color)
Nominations (7): Picture, S. Actor (McLaglen), Screenplay, Sound, Art Direction (Color)
Rotten Tomatoes: 89%
Sean Thornton (John Wayne) is a retired boxer from Pittsburgh who returns to Innisfree, the Ireland town where he was born, to reclaim his family farm.  He meets and falls in love with Mary Kate (Maureen O’Hara) and then outbids her brother, the town bully and notorious land-owner, Red (Victor McLaglen), for the land that once belonged to his family.  Sore from being outbid by this newcomer, Red refuses to sanction the marriage of Sean and Mary Kate.  The Quiet Man in part is about the difference in customs from us Americans and those of Ireland and the stubbornness and pride of the Irish when it comes to abiding by those traditions.  Evidently, a sister couldn’t marry without the consent of her father or brother.   Through trickery on the part of the townsfolk, Mary Kate and Sean, the marriage finally goes through, but once Red finds out he has been tricked, he refuses to give Mary Kate her dowry.  Sean, being of decent means, couldn’t care less about the dowry, but Mary Kate refuses to consummate the marriage without it.  After much heated discussion and a dramatic pulling of Mary Kate into his arms as the wind blows through the open door, Sean convinces her to act like she’s his wife.  Still, Mary Kate wants her dowry, but Sean won’t fight for it and this bruises the pride of Mary Kate.  There’s more to this former boxer than it seems, for after killing an opponent during a boxing match, Sean has turned into a bit of a pacifist and doesn’t confront Red about the dowry.  Mary Kate begins to resent his pacifism to the point where she boards a train to leave.  I would say that the rest of the film is about Sean and his attempt to put his past behind him and stand up for his wife, but that would make it sound like there’s more substance to it than their actually is.  There ain’t no shootin’ in this here John Ford film and it takes place about as far away from the West as you can get without making it about communism.  But being set in Ireland, the film is not without its shots of the gorgeous countryside, which help to earn it the Best Cinematography (Color) Oscar.  What’s more, John Ford won Best Director for this film.  That’s odd to me as I would’ve thought that the award would have gone to DeMille.  Either way, it would’ve seemed liked cronyism or panderingism or what have you.  The Quiet Man is a good film, but it’s not great and I’m not sure what it was about the directing that won John Ford the Oscar.

Director: Cecil B. Demille
Starring: Betty Hutton, Charlton Heston, James Stewart
Wins (2): Picture, Story
Nominations (5): Director, Costume Design (Color), Film Edit
Rotten Tomatoes: 41%
I can begin to understand how this film would have been so well received back in 1952.  I won’t pretend to know all the innovations and new ideas or techniques that Demille brought to the table with the release of The Greatest Show on Earth, but it doesn’t take a rocket surgeon to see that there are plenty.  The Greatest Show on Earth,  opens  just as the Ringling Brothers and Barnum and Bailey Circus prepares for its upcoming season of touring around America.  Charlton Heston plays the general manager of the circus and spends most of his time on screen barking orders and brushing off broads.  The audience is immediately thrust into the front office meeting of the big wigs as they discuss a shorter tour due to the lack of revenue coming in at some of the smaller towns.  Thanks to this, I spent the whole film thinking about how the circus and anyone involved with the circus could ever make a living.  The film, at times, acts as a sort of documentary about the circus; showing all that’s involved in the preparation, the setup, the travelling, the logistics and the circus acts.  Seeing how many people are involved and taking note of the attendance at the shows, I don’t really understand how everyone down to the handful of elephant-riding ladies and clowns piling into tiny cars can earn a living.  When it’s acting as a documentary, The Greatest Show on Earth takes a stab at being a soap opera with love triangles, intrigue, injuries and escaped murderer subplots all going on at the same time.  The best thing about the film is the train wreck scene at the end (see Super 8), though Heston’s barking of the orders while trapped underneath a beam continues on.   The cast is killer, which no doubt drew a crowd upon its release.  Though I didn’t particularly enjoy this movie, there’s no denying that for 1952, The Greatest Show on Earth was quite an achievement. 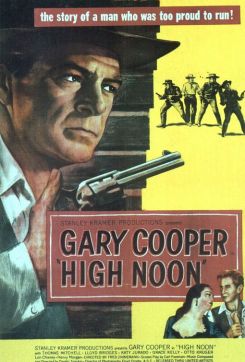 Director: Fred Zinnemann
Starring: Gary Cooper
Wins (4): Actor (Cooper), Drama/Comedy Score, Song, Film Edit
Nominations (7): Picture, Screenplay, Director
Rotten Tomatoes: 96%
Gary Cooper plays the middle-aged marshal of Hadleyville, Will Kane, who has just married a very young and elegant Quaker woman, named Amy, who is played by an absolutely gorgeous Grace Kelly.  The film begins with the end of the wedding and along with turning in his badge, Kane turns over a new leaf as a married man.  However, just as the newlyweds depart Hadleyville for the broader horizons of their new life, news arrives that Frank Miller, a criminal that Kane put away, has been released from jail and is coming back on the noon train for revenge.  Kane chooses to keep this old life in the past and he and Amy leave town.   Whether his motivation is genuine or just a way to protect his pride, Kane convinces himself that the town is what needs protecting and returns.  The film is one long countdown to noon with a view of some type of clock visible in nearly every scene.  What’s also fun is that the time that passes is relatively consistent (though, not exact) with the time that passes by in the film, itself.  Kane struggles with many things as the countdown commences.  He struggles with the idea of standing up to his own enemies head on.  He struggles with recruiting deputies to help out in the fight due to the notorious and frightful reputation of Frank Miller.  But Kane also struggles with the fact that he had vowed to his wife that he would leave this life behind; a wife who is a Quaker and doesn’t believe in violence and who plans to leave town with or without him.  The showdown is immensely satisfying if you’re a fan of the good guys winning.  Gary Cooper won Best Actor for a performance in which he is in virtually every scene.  The film deservedly won for Best Film Editing as well as Best Dramatic Score and Best Song for that repetitive tune droning on throughout the entire duration of the film.