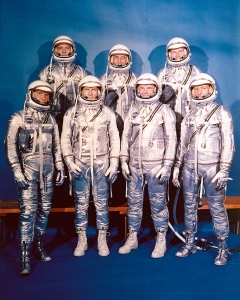 Winner: Ben-Hur
Nominees:
– Anatomy of a Murder
– Room At the Top
– The Nun’s Story
– The Diary of Anne Frank 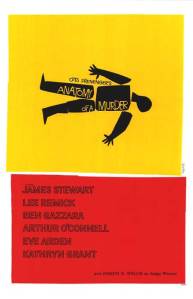 Director: Otto Preminger
Starring: James Stewart, Arthur O’Connell, George C. Scott, Lee Remick
Wins (0):
Nominations (7): Picture, Actor (Stewart), S. Actor (O’Connell), S. Actor (Scott), Adapted SP, Cinematography (B&W), Film Editing
Rotten Tomatoes: 100%
It must be really difficult to write a convincing court-room scene.  Poorly written ones are too easily exposed as contrived due to uneducated writers who try to force their ideas into the story by weakening the arguments of the attorneys or perhaps expose themselves as being misinformed by misplacing, ignoring or just being unaware of nuances that are sure to exist in the real life courtroom.  It seems one would need first-hand experience in a courtroom to put to paper a realistic scenario in which both the players and the dialogue fit the bill.  “Anatomy of a Murder” is regarded by many as one of the purest trial movies ever made.  Indeed, it was adapted by a novel written by John D. Voekler, who served as a judge on the Michigan Supreme Court and who based the book on a murder case that he defended.  The trial itself is one of murder, motivated particularly by rape.  I would say that it serves the movie well that this is not an extravagant mystery that is being argued over, but at the time, such an unapologetic and blatant discussion of rape was unheard of.  “Anatomy of a Murder” isn’t just investigations and courtroom arguments, though.  Perhaps, one of the more memorable moments of the film is the opening credits, designed by Saul Bass and composed by Duke Ellington, who also scored the entire film.  Jimmy Stewart as the defense attorney and George C. Scott, the prosecutor, make for a compelling courtroom drama and both give great performances.  Jimmy Stewart received a Best Acting nomination while both Arthur O’Connell and George C. Scott received Supporting nominations. 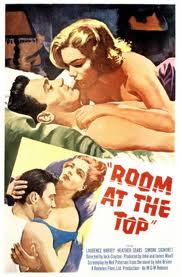 Director: Jack Clayton
Starring: Laurence Harvey, Simone SIgnoret, Hermione Baddeley
Wins (2): Actress (Signoret), Adapted SP
Nominations (5): Picture, Director, Actor (Harvey), S. Actress (Baddeley)
Rotten Tomatoes: 100%
This film, from the standpoint of production and technique, is one of edginess.  The crisp of footsteps on the pavement or the cutting sound of the dialogue always makes me feel like i’m watching something independent…or at least something not burdened with a large budget.  “Room at the Top”, too, is based on a novel with the same name.  In 1940’s England, Joe, played by Laurence Harvey, is driven to climbing the corporate ladder and dealing with the problems that come with impregnating the bosses daughter while at the same time having an affair with an older, married woman played by the beautiful Simone Signoret, who won the Oscar for Best Actress.  She was the first French person to win an Academy Award.  We see Joe’s rocky climb to pseudo-success along with his fall and spiral downward.  “Room at the Top” is a small, unambitious film, but what it lacks in pomp it makes up for in tasteful presumption.  Laurence Harvey, too, received a Best Actor nomination while Hermione Baddley was nominated for Supporting Actress.  Jack Clayton was nominated for Director. 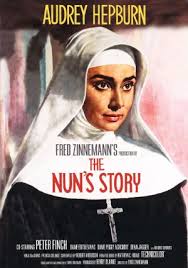 Director: Fred Zinnemann
Starring: Audrey Hepburn, Peter Finch
Wins (0):
Nominations (8): Picture, Director, Actress (Hepburn), Adapted SP, Drama/Comedy Score, Sound Recording, Cinematography (Color), Film Editing
Rotten Tomatoes: 93%
This is one of those movies where I had no expectations going in and was absolutely and pleasantly surprised by the end of it all.  Audrey Hepburn plays a nun/nurse, named Gaby, who travels across the world, putting the ambitions of her self and personal pride to the side; willing to suffer through the consequences of self-sacrifice for her work.  She is a genuine woman, truly intent upon putting the needs of others before her own and leaves no room for personal aspirations.  “The Nun’s Story” is, in many ways, like “The Song of Bernadette” (1943) where another young, Audrey Hepburn-esque nun endures ridicule due to her supposed visions of the Virgin Mary.  Gaby doesn’t see visions, but simply desires to help others.  True to the theme of the year, “The Nun’s Story” is adapted from a 1956 novel written by Kathryn Hulme. Fred Zinneman was nominated for Best Director. 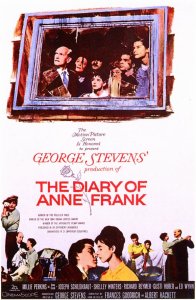 Director: George Stevens
Starring: Shelley Winters, Ed Wynn
Wins (3): S. Actress (Winters), Art Direction (B&W), Cinematography (B&W)
Nominations (8): Picture, Director, S. Actor (Wynn), Drama/Comedy Score, Costume Design (B&W)
Rotten Tomatoes: 75%
This adaptation of the actual account of the young Anne Frank, who spent 2 years in hiding with her family and others, is practically a stage play performed before a camera.  We feel the closeness of all of the individuals who hid for so long in such close quarters; spending most days frozen in complete silence.  The closeness of the walls and the claustrophobia of the situation is not lost on the viewer.  Indeed, we are meant to feel it.  It’s impossible to really feel what they must have felt, but director George Stevens could not have done a better job at getting that feeling across to the audience.  It’s a solemn film, but not without it’s positivity.  Anne is spritely and happy and projects positivity even the in the darkest of times; as they lay hidden from the horrors that hunt them.  There are great moments of tension and suspense as the characters are statuesque and still during the day as the shop below goes about its business.  There are moments of close calls that are riveting yet hard to watch.  It’s difficult to put into words the impact that “The Diary of Anne Frank” had on me, but there is a poignancy at the end and all who watch it will will surely feel it.

OSCAR WINNER AND SHOULD HAVE WON 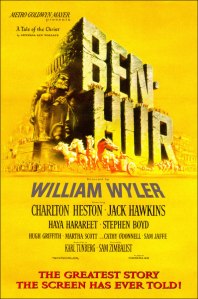 Director: William Wyler
Starring: Charlton Heston, Hugh Griffith
Wins (11): Picture, Director, Actor (Heston), S. Actor (Griffith), Drama/Comedy Score, Art Direction (Color), Sound Recording, Costume Design (Color), Cinematography (Color), Visual Effects, Film Editing
Nominations (12): Adapted SP
Rotten Tomatoes: 89%
You all know how I feel about long movies.  “Ben-Hur” is about as long as they come clocking in at 3 hours and 42 minutes, but there’s so much in this movie to keep you glued to the screen that it flies by.  Ben-Hur was also adapted by an 1890 novel written by Lew Wallace, called “Ben-Hur: A Tale of the Christ”, which had already been adapted in 1925 as a silent film.  Ben-Hur boasts the incredible sets, which were the largest ever made at that time, and the astronomical budget ever for a film at the time (over $15M).  This epic story follows Ben-Hur, a rich, upper class member of the Jerusalem society who is condemned to slavery after an accidental incident involving some falling tile and an uneasy horse.  We follow Ben-Hur through his journey as a slave, a soldier and eventually as a free man back into society and one who must face the changes that have occurred to his family while he was away.  One of the really amazing things about this film is that there are several incidents throughout where Ben-Hur crosses paths with Jesus Christ.  We never see His face, but we see the back or side of Jesus.  Ben-Hur’s obviously altered demeanor or expression from being in His presence are memorable moments for me.  Ben-Hur won 11 Oscars including Best Actor and Best Supporting Actor; something that didn’t happen again until 2004 with “Mystic River”.

1959 is the probably best year in the 1950’s when it comes to Best Picture nominees.  Every movie was easily a thumbs up.  Something interesting that I think is worthy of nothing is that every film in the group was an adapted screenplay.