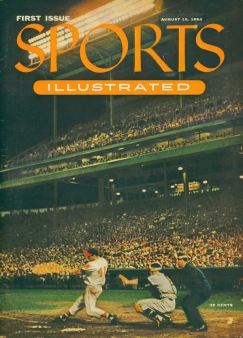 Winner: On the Waterfront
Nominees:
– The Caine Mutiny
– The Country Girl
– Seven Brides for Seven Brothers
– Three Coins in the Fountain

Director: Jean Negulesco
Starring: Clifton Webb, Dorothy McGuire
Wins (2): Best Song, Cinematography (Color)
Nominations (3): Picture
Rotten Tomatoes: 63%
This movie dumb.  Three Coins in the Fountain is hands down one of the worst Best Picture nominees I’ve ever seen.  It’s utterly storyless and surprisingly starless for a movie that was considered as one of the top five films of the year by the Academy.  Three Coins in the Fountain focuses on three administrative secretaries who are working in Rome.  At some point in the film, all three girls come to the conclusion that they should leave to go back to the States, mainly due to a broken heart or lack of their finding a man.  It’s called Three Coins in the Fountain because early in the film, two of the three young women make a wish and throw a coin in this famous fountain.  I’m still not sure how three coins in a fountain has anything to do with the film except for the fact that maybe they were trying to shoehorn the main song title in, which actually won the Oscar for Best Song.  At any rate, that’s one major contradiction that I have a hard time getting past.  I mean, I get it.  Rome is the fountain and the women are the coins, but only two of them actually threw coins in the fountain.  The third woman doesn’t cast a coin into the fountain because she already has plans to return home.  Yet, through three uninteresting storylines, each woman finds her love and stays in Rome.  Basically, the reason these young American ladies are in Rome in the first place is to find a husband, because once they’ve seen there are no rich Italian men for them to wed, they decide to head back home where there are better prospects.  The film shows no shame in this regard.  None of the three women would dare stay in Rome ALONE!  Three Coins in the Fountain actually won the Oscar for the other two categories for which it was nominated: Best Song and Cinematography (Color), for which they can thank the Italian countryside. 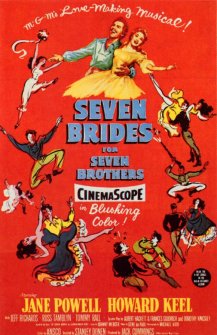 Director: Stanley Donen
Starring: Howard Keel
Wins (1): Musical Score
Nominations (5): Picture, Original SP, Cinematography (Color), Film Editing
Rotten Tomatoes: 88%
A beloved film among many, Seven Brides for Seven Brothers is not my cup of tea at all.  I’m a big fan of musicals, but Seven Brides didn’t sit well with me even from the very beginning.  First of all, the vocals are way too operatic for what’s going on.  Plus, it was so obvious that it wasn’t their real voices that it pulled me right out of the film.  Seven Brides is basically about a young man, named Adam, who travels many miles to the nearest town to get provisions for the winter and also a wife.  He manages to pull this off in one trip and brings her back to his cabin way out in the woods and mountains somewhere.  His 6 other uncouth, derelict, readheaded-tenor brothers want wives, too so they go back into town to try and woo girls of their own at different town functions.  However, they get in fights and later something that can only be described as a dance-off to impress their ladies.  When none of this works, they kidnap their brides-to-be in the dead of night and bring them back to their cabin for the winter where they all fall in love.  It’s a rather preposterous plot and the music isn’t all that fantastic.  While the dance numbers were by far the best thing about the film, it was so obvious to me that the sound effects were off from the choreography.  The swinging of axes on tree stumps and stomping of boots on floors happened at different times than when the sound came across.  I can’t imagine this would have been done on purpose, but it was so blatant that I couldn’t help but wonder if that was the case.  Seven Brides for Seven Brothers was nominated for Film Editing, Cinematography (Color) and Original Screenplay while winning the Oscar for Best Musical Score. 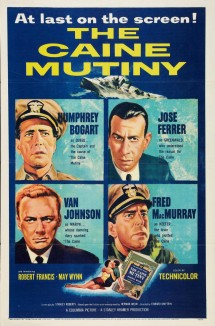 Director: Edward Dmytryk
Starring: Humphrey Bogart, Jose Ferrer, Fred MacMurry, Tom Tully
Wins (0):
Nominations (7): Picture, Actor (Bogart), S. Actor (Tully), Original Screenplay, Drama/Comedy Score, Sound Recording, Film Editing
Rotten Tomatoes: 91%
Adapted from Herman Wouk’s 1951 novel-turned Broadway play, The Caine Mutiny is like a modern-day (60 years ago) Mutiny on the Bounty, except in Caine, the ship is a smaller WWII minesweeper; rarely seeing any type of adventure or danger.  It’s the story of this rugged ship’s new captain, Lieutenant Commander Phillip Queeg (Humphrey Bogart), and his officers Willie (Robert Francis), Maryk (Van Johnson) and Keefer (Fred MacMurray), who find it almost unbearable to serve under such a harsh captain.  Queeg rules with an iron fist and looks for reasons to punish his seamen.  He does really dumb things like spending way too much time conducting an investigation into who took the ice cream.  Immediately, we’re able to diagnose some of the underlying issues that might explain why Queeg is the way he is.  For instance, he carries around two tiny magnetic balls that he rolls around in his hands in true David Bowie-esque fashion.  Matters get worse when the ship is finally called into action and Queeg puts his ship and men in danger by blatantly and quite cowardly disobeying orders by abandoning the other ships they were supposed to be protecting.  Things come to a head when a typhoon out at sea forces their hand and the mutiny commences.  Queeg is court-martialed back home and tried.  The Caine Mutiny is a really good film that is particularly well shot and directed by Edward Dmytryk, who did not receive a director nomination.  Humphrey Bogart received a nomination for Best Actor, along with Tom Tully for Supporting.  Other nominations for The Caine Mutiny include, Adapted Screenplay, Drama/Comedy Score, Sound Recording and Film Editing. 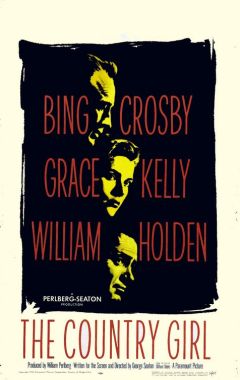 Director: George Seaton
Starring: Bing Crosby, Grace Kelly, William Holden
Wins (2): Actress (Kelly), Original SP
Nominations (7): Picture, Director, Actor (Crosby), Art Direction (B&W), Cinematography (B&W)
Rotten Tomatoes: 83%
The Country Girl is a really great little film that is rarely talked about these days and is quite overshadowed by the legendary, On the Waterfront.  Grace Kelly’s beauty doesn’t exactly radiate off the screen, since she plays a more homely character, but it forces us to focus on her acting chops.  Kelly plays Georgie, the plain old wife of a once-successful stage actor, Frank (Bing Crosby) who has just been cast in a musical by its director, Bernie (William Holden).  Georgie is bitter and Frank lacks self-confidence and Bernie finds himself caught in the middle being ping-pong’d back and forth between the two as he attempts to keep Frankie’s confidence up and appease Georgie at the same time.  His first impression tells him that Georgie is selfish, demanding and mean to Frank and it’s because of her that Frank hasn’t been as successful an actor as he once was.  Being played back and forth by the two, Bernie begins to realize that he had it all wrong and that Frank is actually a raging alcoholic and Georgie a very sweet and good woman to have stayed with him.  This prompts Bernie to go from hating Georgie to falling in love with her.  The film does a really great job of keeping its audience in the dark along with Bernie as to who actually is the perpetrator of all the negativity going around.  Once we learn the truth, we see that there is much more to Frankie’s depression than can be seen on the surface.  George Seaton is one of only two directors with Best Picture nominations to actually get nominated for Best Director this year.  Grace Kelly won the Oscar for Best Actress in what supposedly was a huge upset over Judy Garland (Watch A Star Is Born and make up your own mind).  Bing Crosby was nominated for Best Actor and the film won for Adapted Screenplay.  The Country Girl also received nominations for Art Direction and Cinematography (Black and White). 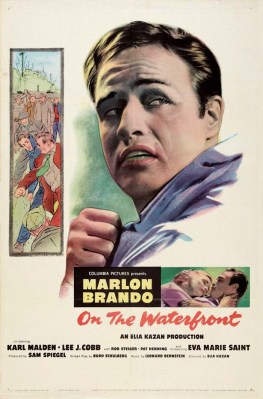 Director: Elia Kazaan
Starring: Marlon Brando, Eva Marie Saint, Karl Malden, Lee J. Cobb, Rod Steiger
Wins (8): Picture, Director, Actor (Brando), S. Actress (Saint), Adapted SP, Art Direction (B&W), Cinematography (B&W), Film Editing
Nominations (12): S. Actor (Cobb), S. Actor (Malden), Actor (Steiger), Drama/Comedy Score
Rotten Tomatoes: 100%
At first glance, On the Waterfront looks like it was made 15 years before 1954.  At a grainy black and white, this film is all story and dialogue, though some of its shots will forever remain in the pantheon of great film images.  On the Waterfront is perfectly cast with the underdog, Terry (Marlon Brando), taking on Johnny Friendly (Lee J. Cobb), the crime boss who practically controls the union, while Terry’s own brother, Charley (Rod Steiger) is a henchman for Johnny Friendly.  Eva Marie Saint is the love interest and Karl Malden hammers out a stellar supporting role, which was typical for him.  For me, On the Waterfront is just a really solid film right up until that famous scene in the backseat of that car, when the film goes to another level.  Terry confronts his older brother, who ruined Terry’s boxing career by having him throw fights years previously.  It’s not “I coulda beena contenda” that stands out to me, but the entire monologue itself.  Brando’s whole speech in that backseat is not only fantastic from a writing perspective, but it’s a legitimate and heartfelt conversation between two brothers.  You really feel the love they have for each other, but also the pent up anger and frustration that Terry feels for Charley.  Not only could Terry have been a contender, but he could have at least been “somebody”.  However, due to Charley’s underhanded dealings on behalf of Johnny Friendly, Terry is neither.  On the Waterfront received, by far, the most nominations of any other film that year with 13.  Brando and Saint won for Best Actor and Actress and three of the five Supporting Actor nominations were held by Cobb, Malden and Steiger.  On the Waterfront also won for Original Screenplay, Art Direction, Cinematography (Black and White) and Film Editing.  Leonard Bernstein received a nomination for Best Drama/Comedy Score. 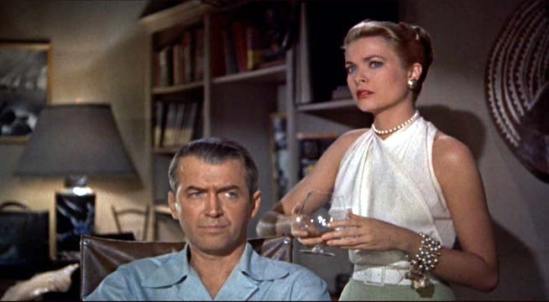 1954 marks the first year that less than 3 Best Picture nominees were also nominated for Best Director.   To me, that is the mark of a weak year and 1954 certainly is, at the very least, top heavy.  If it wasn’t for On the Waterfront and The Country Girl, this would be one of the worst years ever.  Rear Window is one of my favorite films and it really is hard to argue against a Hitchcock directing win for Rear Window, but Elia Kazan’s On the Waterfront would have been the only film this year that could have beaten it.  And without a Best Picture nomination, Hitchcock had no chance.