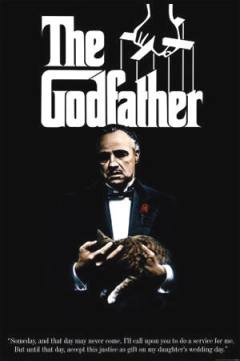 Director: Francis Ford Coppola
Starring: Marlon Brando, Al Pacino, Robert Duvall, Diane Keaton
Wins (3): Picture, Actor (Brando), Adapted SP
Nominations (10): Director, S. Actor (Caan), S. Actor (Duvall), S. Actor (Pacino), Costume Design, Sound Mixing, Film Editing
Rotten Tomatoes: 100%
The thing is there’s not really much that I can say about this wonderful film that hasn’t already been said many times.  It’s without question one of the greatest films ever made and is a perfect example of storytelling, acting, writing, score, costume, art direction, lighting, pacing, directing, cinematography and virtually all other aspects of film.  The Godfather is the story of the Corleone crime family inNew York.  Sometimes it feels good to be rooting for the bad guys and Marlon Brando’s performance makes it really difficult to dislike Don Coreleone, the Godfather.  Al Pacino plays the youngest son, Michael, who wants nothing to do with the family and it’s his progression throughout the film that really captures our attention.  Brando won the Oscar for Best Actor, but refused in protest to the treatment of Native Americans inHollywood.  [SIDE NOTE: It was Mark Twain that said, “To refuse awards is another way of accepting them with more noise than is normal.”]  This masterpiece only won 3 Oscars and it is shocking that it wasn’t even nominated for cinematography in a year where only 1 Best Picture nominee was nominated in that category.  The Godfather is adapted from the novel, written by Mario Puzo, that actually tells the story of the first two films.  Coppola tells the story in two masterpieces.  The Godfather is a 70’s take on noir and Coppola brilliantly sets a distinct tone of eeriness and suspense throughout the film and a tone that I can feel now just thinking about it.  It clocks in at just less than 3 hours, but those are 3 of the best hours that you will ever spend watching a film. 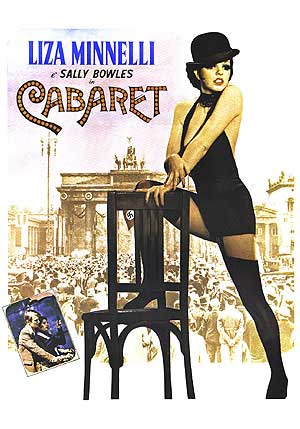 Director: Bob Fosse
Starring: Liza Minnelli, Michael York, Joel Grey
Wins (8): Director, Actress (Minelli), S. Actor (Grey), Score Adaptation, Sound Mixing, Cinematography, Art Direction, Film Editing
Nominations (10): Adapted SP, Picture
Rotten Tomatoes: 97%
I have to be careful not to resent the film for winning 8 Oscars and beating out The Godfather in virtually all of those.  If this type of oversight were to happen today, then I might be more susceptible to that kind of prejudice.  However, a 40 year chasm between then and now really helps to remove any dogs in the fight that I might have.  That being said; I was bored.  Those familiar with this blog know that I am a fan of the “Musical” and I have no doubt that the stage version of Cabaret is a much better experience, especially those productions where the audience is a part of the performance.  On film, however, Cabaret is choppy.  It jumps back and forth from the actual Joel Grey-filled cabaret scenes to the storyline of this couple, Sally (a cabaret dancer) & Brian (an English teacher), played by Liza Minnelli and Michael York (twins Basil).   The film is set in Berlin in 1931 just before all hell broke lose as Sally and Brian make an attempt at a relationship, which doesn’t really work due mostly to his being gay.  With any film-viewing experience, one must ask themselves, “So what?”  If that question can’t easily be answered, then there’s a problem.  Those familiar with this blog will also know that anything involving the setting and time period of Nazi Germany, the Holocaust or WWII, directly or indirectly, will easily have my attention.  Cabaret, unfortunately, didn’t grab me in the least.

Director: John Boorman
Starring: Burt Reynolds, Jon Voight, Ned Beaty
Wins (0):
Nominations (3): Picture, Director, Film Editing
Rotten Tomatoes: 94%
Not a fan.  For me, if a film isn’t grounded in some type of reality, that is to say, if the reason for the characters’ actions isn’t based on any sort of reality, then I remove myself from the film.  If the cause and effect aren’t in accordance with one another, then I will judge the film differently from then on out.  For instance, if I saw my friend being assaulted in the woods and I had a bow and arrow handy and my nerves were calm and my shot were true, then I would end the life of the perpetrator.  I would then leave the body, save for the arrow, which I would remove from the carcass and put back in my quiver and high-tail it down the river.  Upon my return, I would promptly go to the police and tell them what happened.  They can run their tests and see that my story is accurate.  So, at that moment in Deliverance when our 4 friends decide to bury the body and keep that whole ordeal a secret, I sort of just left the conversation, as it were.  This happened again when Drew dives off the canoe and is found downstream, put in a half-nelson by the raging rapids and dead.  If this were my friend, I would pick up his body and take it down river and home for his family to bury.  I certainly wouldn’t sink it and lie to his wife and children.  So, you see, if the effects (burying a body) don’t match the causes (killing in self defense), then I don’t see any need to invest much into the rest of the film.  Deliverance must be praised for its acting due to Jon Voight, Burt Reynolds, Ned Beatty and Ronny Cox and for its river rapid scenes, which were expertly shot.   It succeeds at coming across as a horror film on water and for that I say well done. 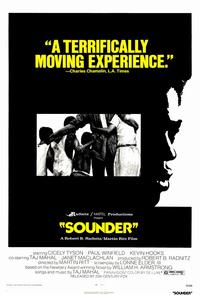 Director: Martin Ritt
Starring: Cicely Tyson, Paul Winfield
Wins (0):
Nominations (4): Picture, Actor (Winfield), Actress (Tyson) Adapted SP
Rotten Tomatoes: 88%
This is a great little film set inLouisianain the 1930’s (or thereabouts) about an extremely poor family of sharecroppers.  David Lee’s mother and father do what they can to survive in a time where families just like them were never dealt a fair hand.  In a moment of desperation, the father, Nathan Lee, played by Paul Winfield, steals food for his family.  He is caught and sent to prison.  David Lee and his mother, Rebecca, played by Cicely Tyson, have to run the household as well as harvest the crops.  Sounder does a great job of capturing the sadness that comes when a family is torn apart in such a way.  It’s a fantastic story of this family, focusing in particular on David Lee and his journey to visit his father.  Sounder is based on the 1969 young adult novel by William H. Armstrong and is adapted seamlessly to the screen by director Martin Ritt (Hud) and screenwriter Lonne Edler III.  But of course, the Oscar-nominated performances from Tyson and Winfield help to make this movie what it is.  Sounder is the name of the family dog, who survives a pretty intense gunshot wound and also accompanies David Lee on his journey to visit his father.  It’s an exceptional film and deserving of its Best Picture nomination.

Should Have Won:      The Godfather

Of the Best Picture nominees, Only Cabaret and The Godfather actually won any other awards.  Most of those were won by Cabaret, which took home 8 statuettes.  I don’t understand how Cabaret won director, cinematography and film editing.  Francis Ford Coppola, without a doubt, should’ve won director, but the Academy saw fit to award the legendary choreographer, Bob Fosse instead.  Cinematography not even getting the nomination is laughable.  Cabaret was choppy and The Godfather was editing perfection so I’m not sure what happened there.  Those three awards easily should have gone to The Godfather.  Art Direction is arguable for either, though if it were up to me, I would give it to The Godfather, but I guess the cabaret scenes in Cabaret were enough to win.  Interestingly, neither film won for Costume Design.  I’ll concede on the acting wins for Cabaret, since The Godfather didn’t have a female lead and the cast is so loaded, that much of the supporting actors were spread thin.  Overall, 1972 was a solid year with successful films that range from the bigger (Cabaret, The Godfather) to the smaller (Deliverance, Sounder).  All 4 films that I saw are exceptional and well-made.  Watch out for an update to 1972 whenever I can find a copy of The Emigrants.  Take heed, in future Wizard of Oscar decade wrap-ups, don’t be surprised to find The Godfather present on them all.