Director: Delbert Mann
Starring: David Niven, Deborah Kerr, Wendy Hiller, Rita Hayworth, Burt Lancaster
Wins (2): Actor (Niven), S. Actress (Hiller)
Nominations (7): Picture, Actress (Kerr), Adapted SP, Drama/Comedy Score, Cinematography (B&W)
Rotten Tomatoes: 77%
I rather enjoyed this little film, which takes place in a small English hotel the guests of which evidently are staying long term and are somewhat acquainted with one another.  Nothing overly dramatic really happens except for one of the guests (David Niven) attempting to hide newspaper articles about his having been charged with sexual harassment against a number of women in a different town.  However, there’s enough drama here to keep you tuned in; smaller stories here beneath the surface that crop up and in a way, stir the pot.  The title comes from the guests’ eating arrangements.  Meals are served at particular times and the guests all eat at their own little tables for one or two.  Separate Tables is a bottle movie of sorts that really focuses on it’s many fantastic characters staying at this hotel.  They’re all moderately aware of what each other are doing and it’s their interaction with each other that make this particular film interesting.  Props must be given to the cast, who really bring these characters to life.  Each character seems to come from their own world and, though may exhibit signs of unlikeability, can be at least appreciated in their own way.  Separate Tables is sort of like Clue, but in slow motion and without all the cleavage and murdering.

Director: Stanley Kramer
Starring: Tony Curtis, Sidney Poitier, Theodore Bikel, Cara WIlliams
Wins (2): Original SP, Cinematography (B&W)
Nominations (9): Picture, Director, Actor (Curtis), Actor (Poitier), S. Actor (Bikel), S. Actress (Williams), Film Editing
Rotten Tomatoes: 81%
A black prisoner and a white prisoner in route to probably some prison are the only two to break free when their truck pull of prisoners crashes.  Suffice it to say that John (Tony Curtis) and Noah (Sidney Poitier) do not get along and were, in fact, intentionally shackled together for the amusement of the guard.  They quickly learn that their chains are unbreakable with the simple tools they have access to and, unable to go their own separate ways, begin arguing about what direction they both will be going together.  Due to fact that these guys hate each other, their escape experience is one of defiance both to each other as well as their refusal to give up their escape from the oncoming and relentless group of searchers with their pack of bloodhounds, a storyline that frequently and rather humorously interrupts the journey of our escapees.  Unlike other Stanley Kramer films, the racial message of The Defiant Ones, though prevalent, isn’t exhaustive.  In some of his films (Ship of Fools) Kramer emphasizes perspective by bludgeoning the close-minded and guilty audience in the face with the message, which tends to come across as over-the-top.  In The Defiant Ones, however, Kramer seems to really have found a balance.  Poitier and Curtis are both incredibly likeable actors though they play characters who, though one might sympathize with, aren’t easily likeable.  We do end up pulling for the duo as they blunder through towns and farms trying to break free from the chains binding them together.  They finally find solace in a farm house where their chains are loosed and they part ways.  However, John learns that the woman of the house sent Noah to a swampy death and his concern for Noah’s well-being has formed a new bond and brings the two back together. 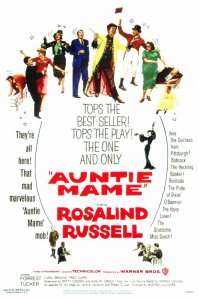 Director: Morton DaCosta
Starring: Rosalind Russell, Peggy Cass
Wins (0):
Nominations (6): Picture, Actress (Russell), S. Actress (Cass), Art Direction, Cinematography (Color), Film Editing
Rotten Tomatoes: 92%
Auntie Mame is a film that flirts with wearing out its welcome almost from the very beginning.  The thing is, it takes itself so lightly that I was at ease and not really annoyed all that much.  The problem, though, is that it just isn’t any good.  A young boy, named Patrick, is sent to live with his aunt Mame in her lush Manhattan apartment after the death of his father.  Mame is inexplicably rich, throws lavish parties and has famous and very interesting friends.  Life at auntie Mame’s is never dull, with incredible parties every other night the guest list of which consists of some really great names of the day.  This does not sit well with Patrick’s trustee, who disapproves of this lifestyle.  The film quickly turns into a survey of Patrick’s young life from the perspective of Mame, trying to make it in the world after losing her fortune in the stock market crash.  This is quickly replenished when she marries a rich, southern oil man and moves to Georgia.  We see Patrick in different stages of growth and Mame’s apartment or home in different styles of design.  Never worried, Mame has a bright outlook and good attitude and most of the lines in the film, which is only slightly unfortunate because the lines, especially the ones intended to be quippy, aren’t very good.  The art direction and set design are the best things about the movie.  Rosalin Russell is certainly likeable, but her lines leave much to be desired.  There’s not much of a story here and what little story there is isn’t told very well.  However, it’s not offensive in its dullness.

Director: Vincente Minnelli
Starring: Leslie Caron
Wins (9): Picture, Director, Adapted SP, Musical Score, Original Song, Art Direction, Costume Design, Cinematography (Color), Film Editing
Nominations (9):
Rotten Tomatoes: 74%
Gigi is, at its core, is a love story between a young girl, named Gigi (Leslie Caron) and a handsome and wealthy young man named, Gaston (Louis Jordan), who is very much a member of high society in Paris and breaks up with his mistress who has been caught cheating.  Gigi and Gaston are very close in a brother and sister sort of way.  Gigi is of the age where she is being taught the proper etiquette and education expected of a woman in the Paris upper class. However, Gigi has no interest in that.  Instead, she convinces Gaston to take her with him to his holiday by the sea.  Long story short: the two fall in love and get married.  That’s really what Gigi is about.  There’s nothing at all fancy about the story.  The art direction and set design is really fantastic, though.  The film probably only takes place on a half-dozen different sets.  Each scene is executed in a way that feels very much like a play within these very stunning hand-made sets.  Obviously, in a film that takes place in Paris and involves the upper class, one would expect to see such wonderful costumes and indeed one does.  Gigi is a perfectly acceptable film, though certainly not the best picture of the year.  Gigi went 9 for 9 as far as winning Oscars goes and actually beat Gone with the Wind’s record.  However, Gigi’s record stood for merely one year thanks to the powerhouse that was Ben-Hur. 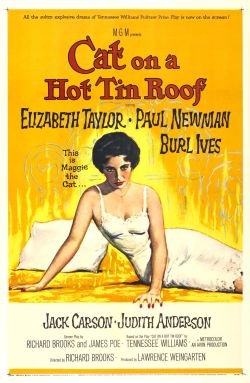 Director: Richard Brooks
Starring: Paul Newman, Elizabeth Taylor, Burl Ives
Wins ():
Nominations (6): Picture, Director, Actor (Newman), Actress (Taylor), Adapted SP, Cinematography (Color)
Rotten Tomatoes: 97%
This is a wonderful adaptation of Tennessee Williams’ stage play.  That Mississippi weather translates so well on the screen giving the atmosphere, already thick with tension, an extra thickness of hot, sticky humidity.  Brick (Paul Newman) is a former athlete but still living in that world.  For instance, he breaks his leg trying to jump hurdles like the old days and spends the entirety of the film hobbling to and from the wet bar.  Brick’s also an alcoholic fighting depression more likely than not brought on by the death of his best friend.  Brick spends the entire film also fighting with his wife, Maggie (Elizabeth Taylor).  Maggie is stunningly beautiful and loves Brick and wants nothing more than to have thousands of his babies.  Brick, however, is totally annoyed and indeed not attracted to his wife.  Maggie brushes off Brick’s snide insults and rejections with empty conversation and changes of topic while Brick pours drink after drink until he feels that “click”.   Maggie, Brick’s brother, Gooper and his infuriatingly vindictive wife, Mae, fight over the will of Brick’s very rich father, Big Daddy (Burl Ives), who is dying of cancer.  In the midst of the chaos, Maggie is found to be defending Brick’s honor, which is being dragged through the mud by Mae and is allowed to do so without objection by Brick himself.  Brick couldn’t care less about who takes over the family business and how much money is left to them.  His mind is on other matters.  Matters of the past.  Matters of nostalgia.  Matters of a friend dead and gone and matters of, dare I say, love.  Brick cares for very little other than that.  Gooper and Mae shameless parade their children around in order to spark affection from Big Daddy, but he only wants Brick to take over and shows a certain affection for Maggie.  In a way, Big Daddy’s relationship with Big Momma (Judith Anderson) mirrors that of Brick and Maggie’s.  Big Momma talks ceasely of things unimportant all in an effort to avoid the cold reality that is Big Daddy’s impending death.  This film is just so good.  Williams’ dialogue is simply perfect and there are layers upon layers here.  Layers that are peeled off to reveal more and still layers that remain in place covering things of which we can only speculate; layers not completely acknowledged and backstories not completely explored.  The style is off the charts, yet understated.  Newman and Taylor are a match made in heaven and what’s more, the film has a happy ending.

I suppose I dare not post The Wizard of Oscar 1958 without mentioning Alfred Hitchcock’s Vertigo.  A mysterious and confusing a film as Hitchcock’s made, Vertigo really strings the audience and the main character, Scottie, along until the very end.  This San Franciscan, ex-cop takes a private case following a young woman named, Madeleine.  A relationship is formed between them and that’s when things get really weird. Though it’s made in a wonderful-looking color, Vertigo is ripe with noir-like elements.  The score, too, is one of the things I like most about the film.  It is odd that the film received only 2 nominations for Art Direction and Sound Recording.  That’s pretty bizarre.  Vertigo should have been nominated and arguably (not by me) could have won.  However, Vertigo doesn’t belong anywhere near the AFI #1 spot.  Not by a long shot.